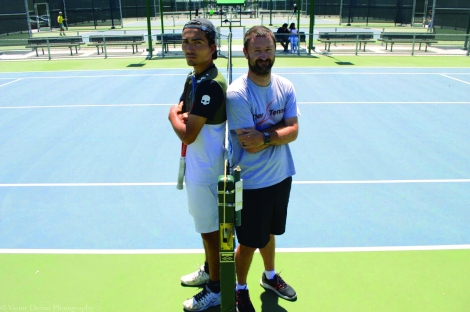 From left, OEC Player of the Year Kanye Trustfull and OEC Coach of the Year Tom Yancey lead the Tigers to a 19-2 record this season. Trustfull went 15-3 in singles and 9-0 in conference, while going 9-4 in doubles and 4-2 in conference. Victor Duran | Viewpoints

A year ago, Kayne Trustfull was playing high school tennis in his home country of the Netherlands. Now, the Riverside City College freshman phenom is the Orange Empire Conference Men’s Tennis Player of the Year. “It’s a big honor, I really appreciate it,” Trustfull said. “But it’s not only me. It was a big team effort that we did together.”

The Amsterdam native has an extraordinary bond with his teammates. After all, it was teammate Thierry Van Os, who is also from the Netherlands, who suggested Trustfall to RCC.

“(Van Os) introduced me to the school and I really liked the program and the coach so I decided to come here, Trustfull said.

After this season, it’s safe to say he made the correct decision. Trustfull was unstoppable this season, posting a 15-3 singles record overall and an unbeaten mark of 9-0 in OEC play. In doubles he had a 9-4 record along with his partner, freshman Thomas Piddoux.

“I’ve been working hard here,” Trustfull said. “I’ve been trying to improve with the team and I feel like I’ve gotten much better every week. I feel like that contributed to getting better and winning all of those matches.”

Trustfull puts in a lot of hard work on the court, but studying the game off the court can be just as important.

“I always looked up to the aggressive players,” Trustfull said. “I like the hard-hitters, with the big forehands and serves, and that also translates to my own game.”

Trustfull compared his game to a player he enjoyed watching growing up, Andy Roddick.

“I for sure don’t have the serve Roddick has but he has a very hard forehand and I have the same,” Trustfull said.

As talented of a player as Trustfull is, he acknowledges that he couldn’t do it all himself. Luckily for him, he gets to learn from the now two-time OEC Coach of the Year, Tom Yancey. Trustfull had nothing but praise for his coach and mentor.

“Coach is super nice to all of us and he’s a very good coach as well,” Trustfull said. “When I have any problems, I can always come to him and ask him anything and he’s there for me, as a tennis player, but also personal.”

The team clearly rallied around Yancey, as they were able to win a share of the conference championship with an overall record of 19-3 and conference record of 9-1.

Just like his top player, Yancey humbly gave credit to the team around him.

“(We have) great players and they’re all great leaders,” Yancey said. “You’re only as great as the players you got.”

Yancey also had a lot to say about Kayne Trustfull and the tight dynamic between the two.

“For as young as he is, he’s very independent and self reliant, but when he does need assistance he’s willing to come forward,” Yancey said. “He’s been a pleasure to coach on the court, there’s not much you need to tell him. He’s wise beyond his years. He’s one of the best