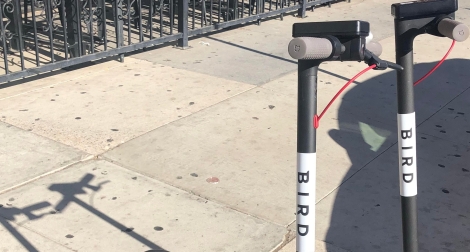 There are birds in Riverside! No, not the kind that fly.

Bird is an electric scooter company that places scooters on public streets which can be unlocked from a smartphone and ridden.

The company is based in the Los Angeles area but is now dispersing the scooters throughout the nation.

Within the past few months, the electric scooters have made their way into Riverside. It is the only city in the Inland Empire that has them.

They can be seen around the Riverside Plaza, Riverside Auto Center and outside institutions like UC Riverside and California Baptist University.

“I have so much fun on the Birds and I think they add a bit of modernity to the city,” Fey Ramirez, a resident of Riverside, said. “I use them to ride around with my friends and it’s really cool that I don’t have to leave them anywhere specific.”

According to Ramirez, she used a Bird to ride from the bus stop to work and made it just in time. If she had not used the Bird and walked instead, she would have been late.

The scooter rides range in price and begin at $1 to unlock the scooter and 15 cents per minute while it is in use. However, the price per minute can vary depending on the city where the scooter is used. When the rider is finished, all they have to do is disconnect the Bird app on their smartphone.

Riders then leave the scooters right where it is and continue their day.

In addition, if someone is looking for a Bird to ride but does not know where to find one, the Bird application has a GPS feature that locates where the scooters are in the area.

Not only do the electric scooters provide an alternate option for commuting, they also provide a way for people to make money.

One can sign up to be a “charger” for these Birds which entails bringing home the scooters, charging them and then dispersing them into strategically assigned places, or “nests,” the following morning.

Only needing a smartphone, driver’s license and spare change on their debit card, people can take advantage and ride Birds up and down the streets of Riverside.

However, these scooters have not come without any conflict. Some Los Angeles neighborhoods including West Hollywood have banned the use of electric scooters.

One of the features of these electric scooters is that they have no designated spot to be returned to once the rider is finished.

Therefore the scooters can be left in the middle of walkways, sidewalks and other busy intersections.

Bird scooters have been spotted in the Riverside Plaza that can sometimes cause a blockage in the walkways.

“I see a lot of younger kids using the scooters and sometimes they will just leave them in the middle of the sidewalk,”  Gabrielle Cruz, an employee of El Torito inside the Plaza, said. “Most people will put them to the side or near the entrance of a store.”

According to Cruz, she has noticed that there has been more business coming through the Plaza due to the scooters being there.

A similar company called Lime has also released its scooters into the Riverside area despite the city not being listed on the Lime website.

“I like both Lime and Bird scooters, but I lean slightly more on Lime because they’re the ones closest to my apartment and plus green is my favorite color,”  Serene Rodriguez, a resident of Riverside said.

Whether someone needs to avoid paying the rising price of gas or just wants to have a bit of fun with some friends, this new mode of transportation is making its mark on Riverside.

Whichever way the future goes for these scooters, they have managed to impact the ways residents can travel around the city and go about their daily lives.