Tigers’ goalkeeper Dustin Shaw throws the ball out after having one out of his seven saves of the game against Fullerton College on Oct. 28, where they defeated the Hornets 20-9. (Stacy Soriano | Viewpoints)

Tigers’ Lazar Raca sets up for a shot versus Fullerton College, where he finished with six goals, three assists and two steals Oct. 28. (Stacy Soriano | Viewpoints) 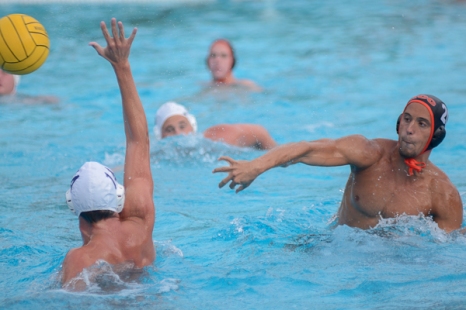 Riverside got out to a 5-2 lead after the first quarter and led 11-4 by halftime.

After three quarters the Tigers led, 19-6.

Tigers’ Raca and Christian scored 11 of the 20 goals in the match.

Sophomore co-captain Trevor Tripp took notice how there were players that were able to accomplish the task at hand.

“Some of our players have had to really step up with a few of our players being out with injuries and they’ve done a great job in the games” Tripp said.

Head coach Jason Northcott noted that the team met the significant expectations that he had for them.

“In our final regular season game of the year, it was important for us to remind ourselves how to dominate an opponent,” Northcott said. “In post season games, a sense of urgency becomes a more important factor; I wanted to see that in our team today and I got exactly what I was looking for.”

Freshman center Sean Todd also complimented the team on its performance in the win.

“It went really well, we played solid defense which allowed us to counter and score,” Todd said. “It was a good way to end regular conference play so now we are getting ready for conference championships.”

The Tigers will receive a bye in the first round of the OEC Championships.

Although the Tigers won their last conference game of the season, Tripp believes that there is still room for improvement going into the conference championships.

“We have been focusing mainly on defense during practices,” he said. “Our goal is to keep those great teams below double digits in goals.”

The Tigers will face Orange Coast College on Nov. 6 at RCC.

OCC will come into this game as the number three team in the conference, with an 11-8 overall record, while Riverside comes one seed above with a 15-9 overall record.