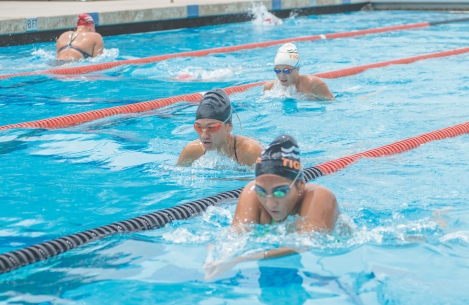 The Riverside City College women’s swim team took the Orange Empire Conference Championship on April 20-22 from Orange Coast College, who had won the title nine years in a row.

The Tigers put up 802 total points in the event to beat the Pirates who came in second with 712 points.

RCC came in as underdogs to upset Orange Coast College, who had endured a long glorious road of success the last 18 years.

“I was hoping by the end of the meet we would still be up by 15 or 20 points and squeak a win but the girls just went ahead and overachieved,” head coach Doug Finfrock said. “(They) swam really well and ended up winning fairly easily on that last day.”

The conference record was previously held by Tori Cree of Golden West College who had a time of 2:29.76, according to the OEC conference website. Martin also broke her own school record that she had set last year.

Finfrock, who won the accolade of Orange Empire Conference Coach of the Year, said his concept is being a part of something bigger and credits the whole staff around him.

“This one was really more about a group effort,” Finfrock said. “Our staff is pretty tight here. We all support one another and we all help each other get better. Yeah, my name goes on it I guess, but it’s never really a single person thing, it’s more of an accolade for the entire aquatics staff.”

The team qualified 16 individual swimmers for state that are seeded in the top eight and have two weeks to train and get ready for the state playoffs in East Los Angeles College.