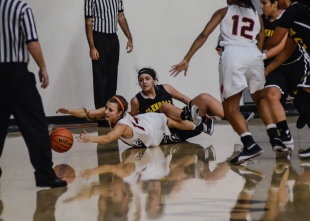 Kylie Stevenson, guard for the Tigers’ dives for the ball after falling to the floor with Glendales player, Mary Karapetyan on Nov. 13.

Point guard Vyvy Tran shoots a layup versus Glendale in the 2nd annual Earn Our Stripes Tournament on Nov. 13.

The women’s basketball team cheer in a huddle after their victory over visiting team Irvine Valley College on Feb. 17, 2016 where they finished 57-56.

The Tigers were unable to hold off LBCC after cutting a double digit lead down to six by halftime.

The game started on a sour note for the Tigers, with freshman forward Chyna Burris committing a turnover 15 seconds into the game. Freshman forward and team leading rebounder Paradise Hanchett also coughed the ball up on the following possession, giving LBCC easy opportunities to push the pace of the game.

After scoring only 10 points in the first quarter, RCC clawed and scratched their way to a 32-26 deficit at the half, due to their aggression while driving to the rim. Their efforts compelled the referees to make calls, giving RCC 14 free throw attempts during the first two quarters.

Hanchett was a force down low, grabbing 10 rebounds in the first half, 16 in total. Her activity kept the game close as the Tigers struggled to make shots, going 8-26 as a team in the first segment of play.

They managed to connect from 3-point range, making three of eight shots from behind the arc.

For Long Beach, their overall depth of talent was on display, with eight of their 11 players scoring in the first half. The combination of LBCC guard Taylor Smith  and center Miranda Martinez  helped the Vikings to impose their will on RCC offensively by scoring a combined 12 points and eight rebounds in the first half of play.

In the second half, the Tigers played as if the pendulum of momentum would swing in their direction, cutting the deficit to 32-28 early in the third quarter after freshman DoyleBonet Walker  scored on a layup from an offensive rebound. She, along with sophomore Jordan Lofton, provided most of the offensive firepower for the Tigers in spite of missed shots.

LBCC then went on a 6-0 run to push the lead back to 10, and the lead increased to 43-30 with five minutes left in the third quarter.

Unfortunately, that four-point margin was as close as RCC would get.

The backcourt tandem of Walker and Lofton helped to revitalize team morale and toughness in the fourth quarter, scoring 11 of the team’s 13 points in an effort to chip away at a double digit margin by any means necessary. Walker scored 13 of her game high 20 points in the second half, shooting 4-7 from the field and 5-5 from the line.

“The game was really tight, we could’ve won the game,” Walker said. “We just didn’t. We came to play, and we played really hard.”

Lofton shared her teammate’s sentiment regarding the level of intensity required to compete against a team who beat the Tigers by 39 points in December.

“I felt like I went as hard as possible, even though it was my last game. (Win or lose) I wanted to be satisfied with my performance,” Lofton said.

An interesting fact from the game is that both teams attempted 14 free throws in the first half, with RCC shooting 7-14.

A tough playoff loss notwithstanding, the head coach has established and made strides in the improvement of her athletes’ scholastic achievement, proving that team success extends beyond the field of play.

“With our program, I wasn’t affected by (player ineligibility),” Berber said. “I sometimes lose kids because they know I’m going to get on them when it comes to academics. Sometimes kids say, ‘oh so and so beat you last year’, yeah, but they’re never going to beat us in the classroom.”