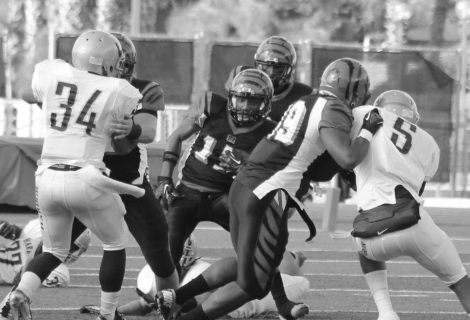 The Riverside City College football team has a number of players from other states on the roster, but players such as Garrette Biggers have managed to stay locally and play for the Tigers after graduating from J.W. North High School. Biggers is a criminal justice major that not only plays for the football team on campus but is also a member of the men’s track team.

Q: If you had a chance to be in the NFL, would you forego your career in criminal justice?
A: Yes, I would want to take advantage of that opportunity.

Q: Have you received a scholarship yet?
A: No,but I would like to go to Baylor or Florida.

Q: If you did not get a scholarship would you continue to play football after RCC for a university?
A: I probably would not.

Q: You are known as a return specialist, what is your longest return in your career?
A: In high school I returned a 99-yard kick return against Corona.

Q: The best moment of your football career?
A: It was my game-winning touchdown against Citrus College in 2012.

Q: What made you come to RCC after graduating high school?
A: I heard a lot about the football and track program and I wanted to be apart of that.

Q: What do you think of RCC’s head football coach Tom Craft?
A: He is one of the best coaches I had in my football career.

Q: After the 71-0 win over LA Harbor, what has practice been like for the team?
A: We are staying focused by practicing hard and trying our best to out work our opponents.

Q: What do you think of your track coach at RCC, Jim McCarron?
A: He is great; he keeps us in a team mindset, even though track is not often seen as a team sport.

Q: Which sport is harder to prepare for? Football or track?
A: Track by far.

Q: How come?
A: The practices are harder at track. One track practice equals a week of “hell week” for football.

Q: Why is that your goal? Are you chasing a record?
A: Yes, the state record for junior colleges is 3:09.

Q: Since joining the track team have you noticed any improvements in your running time?
A: In high school I ran a 48.80 in the 400 open but since joining RCC’s track team I am running a 47.7.

Q: Why Jeff Demps?
A: Just the way he plays. He is so versatile he could play anywhere, which is how I play.