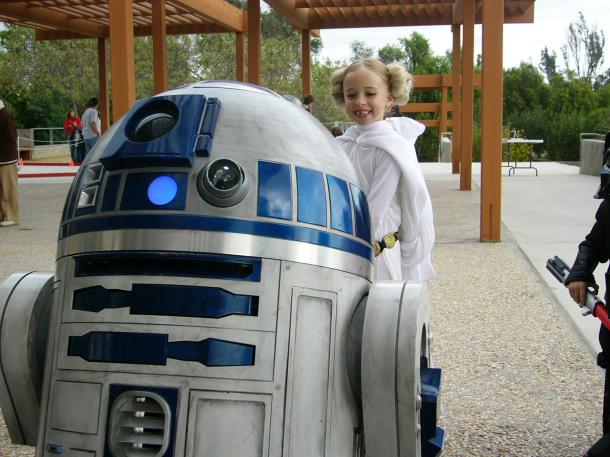 All ages of admirers flocked to the Riverside Woodcrest Community Library for the third annual Robot Expo on the afternoon of Nov. 19.  Hosted and organized by the Riverside Robotics Society and Servo Magazine, the expo drew a couple of hundred attendees.

Thomas Messirschmidt, president of the Riverside Robotics Society and event coordinator, entertained the crowd of kids, students and parents at regular intervals with the amazing display of a robot Elvis, so life-like that it appeared to be a co-host at first.

The community library was buzzing with the tech people of today and tomorrow.

“We are really pleased with the great turnout and the variety of people,” Messirschmidt said.

“We are here to inspire the kids of the Inland Empire. We would like to see more kids grow up to be engineers, mathematicians and scientists,” he said.

Attractions dazzled at every turn, everywhere attendees looked there was something different to see.

A life-size R2D2 scurried around, much to the delight of the crowd.

A seven-foot tall Robby the Robot and a couple Terminator models were in attendance as a displays along with a full-size Wall-E replica.

An interactive target-guided nerf gun that shot at wiggling kids, and an arena for dueling robots that expo goers had brought from home, added to the already magnificent collection of robots and robot-themed attractions at the event.

In 2003, presenter Mike Senna built an exact working replica of R2D2 from the “Star Wars Saga,” that was only missing its companion C3PO to complete the display.

The R2D2 is so authentic that Lucasfilm asked Senna to represent the company on TV and other promotional events.

His R2D2 has been filmed for VH1, MTV, Access Hollywood and Jimmy Kimmel Live.

Senna exudes enthusiasm for robotics and engineering through his excited demeanor and in his words of advice.

“The greatest time to get into tech is now,” Senna said. “Build your stuff. Go through the failures. Don’t quit. Just keep trying to build that same part. Each time you succeed, you build a new skill. When you stack those new skills atop one another, one day you will find that you know what you’re doing,” he said.

Like many presenters, Senna likes to inspire the kids.

“I’m always looking for that ‘aha! I think I can do that too!’ moment from the kids,” he said.

“That’s really what I’m here for.”

The efforts of the presenters bore enlivened fruit from their audience.

Referring to the R2D2, 8-year-old Jason Bernhard of Corona said, “It makes me want to build a robot!”

Jason and his 9-year-old friend Ryan Cowling had been asking his father Gregg Bernhard about a circuit board as they walked back to their car from the Expo.

“We got a circuit board around last Christmas time. Now I think they’re ready to get into it,” said Bernhard.

Robotic Elvis softly crooned “Hound Dog” from across the courtyard as presenter and Mount San Antonio College student, Patrick Kwong delved into the questions he brought with him out to the event, that expressed the curiosi.

“What planning is involved in the wiring and programs? How do I determine how much power will need to be drawn?” Kwong said.

“I want to know everything about how the whole circuitry systems work.”

Other young minds came for inspiration. “I’m getting some ideas for a Physics project I’m doing,” said Patrick Weidhase, a Riverside King High school student. “The engineering skills here are very interesting. The Wall-E and R2D2 robots are impressive.”

Even the more skeptical were impressed with the event.

“I thought it was going to be stupid but it is really cool,” said Alana McKesson, another Riverside King High school student.

So even for those who had never been, the event surpassed expectations, inspired children and adults alike to pursue their dreams, and demonstrated the wave of future for technology.