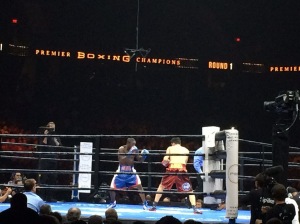 Josesito Lopez and Andre Berto go at it in the first round of their fight March 13 at the Citizens Bank Arena. Photo taken by Victor Gallegos.

The event, which was the first on Spike and second of the series, lived up to the hype as a potential contender to HBO and Showtime.

The televised portion kicked off with Shawn Porter defeating Erick Bone via knockout in the fifth round. Due to the quick stoppage, a third fight was added to the original two fight event.

That is where Riverside’s Chris “Nightmare” Arreola received the chance to once again showcase his boxing talent.

Arreola, coming off his second consecutive loss to Bermane Stiverne, received a rousing ovation from all in attendance as he walked down PBC’s WWE inspired entrance.

Before the match, it was noted that Arreola had arrived to the fight a bit overweight and out of shape. That, combined with his eight year age difference to opponent Curtis Harper, found many picking against Arreola.

It wasn’t long before Arreola began proving his critics wrong. He landed a hard right followed by a left hook, knocking Harper down barely 30 seconds into the first round.

From there, it seemed a matter of when, not if, Arreola would score the knockout. Unfortunately for Arreola, Harper recovered, and after the second round, won the ensuing four rounds to go into the final rounds with a lead in points.

That is when the Riverside “Nightmare” regained his success from earlier rounds. Arreola finished the seventh and eighth rounds with a flurry, taking home a unanimous decision to the delight of the crowd.

From one Riverside native to another, it was time for Lopez, known as “Riverside Rocky”, to finally take the stage against Andre Berto.

Scheduled as a 12-round main event, the pressure was seemingly on the hometown hero to deliver a great performance. Just as they did when Arreola entered the stage, fans cheered wildly for Lopez as he entered the ring with a stone-cold focus.

The first round went well for Lopez as he was the aggressor, repeatedly landing body shots and controlling the pace.

Round two started similarly, with Lopez continuing the body shots, but leaving himself open for Berto’s counter jabs. Even so, Lopez was in control and up two rounds to none on the scorecards, connecting 24 punches to Berto’s 15.

After another well-fought round, Lopez began to lose steam in the fourth, with Berto being much more efficient, swelling Lopez’s right eye in the process.

Controversy ensued, as the referee failed to give a 10 count, instead stopping the fight immediately, even though Lopez sprang back up immediately after the knockdown. Adding to the controversy, the bout did not have a Three Knockdown Rule, meaning that a fighter who has been knocked down three times or less cannot be declared knocked out if he gets up from the knockdown within 10 seconds and is able to defend himself.

Since Lopez was knocked down only twice and got up within a few seconds, the many in attendance, viewers at home and announcers felt the TKO ruling was premature. Lopez was up four rounds to one before the sixth round TKO.

It was a bittersweet end to an action-packed evening. Both Riverside boxers showed a lot of heart. Overall, PBC on Spike TV showed potential to lead boxing into a bigger audience, just like it did with Ultimate Fighting Championship.