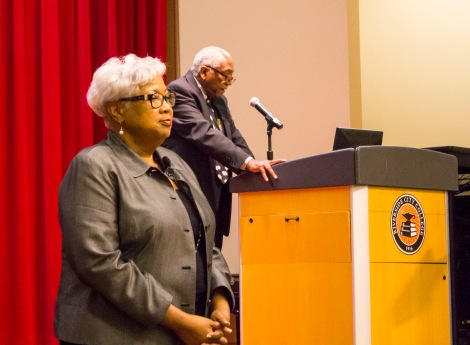 Proud: President Wolde-Ab Isaac introduces Kathryn Jeffery from the stage in the DL Auditorium while Jeffery stands at audience level May 13.

Kathryn Jeffery presented her qualifications as a finalist in the Riverside Community College District chancellor search in a forum May 13 in the Salvatore G. Rotella Digital Library Auditorium.

The forum at Riverside City College represented the last of three stops for her campus and district tours. Faculty and students were given the opportunity to pose questions to the candidate and provide feedback that will be presented to the Board of Trustees.

Jeffery has a 30-year career in academics, and most recently was made the first female president of Sacramento City College in 2008.

“You never know how many people you’re going to have, and I had this anxiety of this sea of people because of the size of the college,” Jeffery said with a chuckle from the 27 people in the crowd. “And I thought oh Jeez, this is really going to be one of those things where I feel separated from the group.”

Jeffery managed to maintain her engagement by strolling down toward the bulk of the crowd and evading the stage in favor of interaction.

She also proved intelligent and adaptive as people asked questions and she geared her examples in the direction of the attending community.

Though Jeffery was forthright and frank, and even at one moment she began to tear up when discussing how much she felt for Japanese internment camp victims, she was personable and at ease.

The chancellor position at RCCD gives the Texas Ph.D graduate an opportunity to grow as a leader and a chance to contribute to the community and build a legacy.

Jeffery is fundamentally collaborative in her leadership style, and inherently oriented to diversity as she expressed in her specific experiences with people from her world travels.

The former president of Hennepin Technical College in Minnesota related specific examples of collaborating in her past for fundraising, arts programs and athletics to how she would use that experience to excel with the theater director, the athletic director and other faculty asking questions in the audience. She engaged questions directly, and with an emphasis on relationship and connection.

When faculty addressed concerns they had with the study abroad program, Jeffery pulled from her diverse and traveled background to emphasize the lessons she drew from her travels to the Caribbean, Africa and Europe. She elaborated how getting to know different cultures helped her to work better with her office team when coming back home, and how she stresses the significance of travel to being more accepting and open to other cultures and variety.

Burnett will present in the Digital Library Auditorium from 1- 2:30 p.m. May 20.

Burke will answer questions in the Digital Library Auditorium from 2 – 3:30 p.m. May 30.