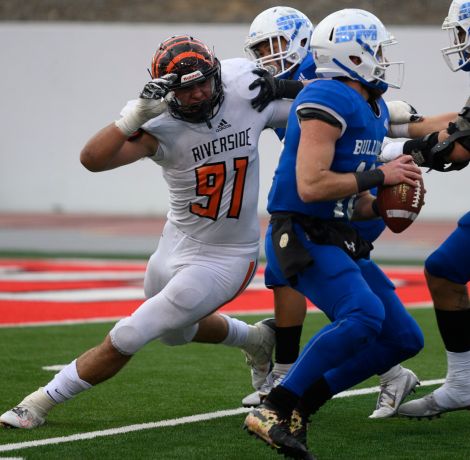 Freshman defensive linemen Alex Navarro-Silva has San Mateo’s quarterback in his sights as he attempts a sack on Dec. 14. At Bakersfield College. Silva and the defense helped the Tigers hold San Mateo to 14 points to secure the CCCAA state title. (Photo by Angel Pena | Viewpoints)

“I couldn’t tell you, we just had to overcome them. And we did a great job of overcoming them there,” said quarterback Jacob Barlage, who was grateful that the penalties slowed down in the second half.

The second half was where the Tigers turned themselves around and dominated. They put together long drives, running the clock and making big plays.

“It was a little bit of feeling each other out early,” said head coach Tom Craft. “And then as the game went on in the first half we started getting the rhythm and they started to get a little tired…and even though we weren’t successful in converting, it did have an effect in the fourth quarter and you saw what happened.”

What happened was RCC football. The Tigers were in charge the entire game and did not let San Mateo catch up.

Barlage, like the rest of the team, picked up the slack in the second half and played like they have the last half of the season. He was threwowing the ball deep, making near perfect passes and helping the run game get moving with precise handoffs.

“It’s been a great experience bringing the players along and the coaches,” said Craft. “I’m really happy for the players but I’m also happy for the coaches who haven’t experienced this. None of our players or our coaches have ever been in this game before. When we got there we wanted to win it. We tried not to focus on the outcome, mostly on the preparation like we have all year. The guys did a great job and they could go another two, three weeks right now.”

Craft was fascinated to see such dominance from his team, despite having some nerves going into the game, they got rid of them early and just played football.

“It is a dream come true,” said Barlage. “I can’t even explain it. I’ve been watching these guys for so long and being able to be the one to win this game, it’s awesome.” Barlage was named MVP of the game. He was 22-31 for 286 yards and one touchdown.

Wide Receiver Dylan Laurent was named Offensive Player of the Game. He had seven catches for 124 yards.

Kobey Fitzgerald was named Defensive Player of the Game. He had four tackles and one assisted tackle.