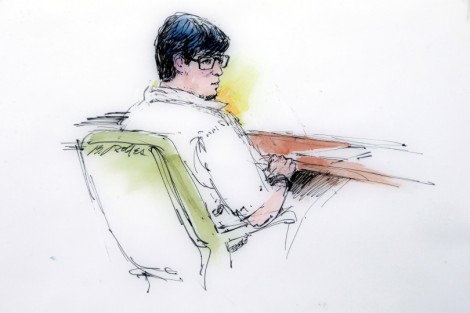 Enrique Marquez is shown in a court artist’s sketch during a bail hearing in federal court on Dec. 21, 2015. Image Courtesy of Mona S. Edwards

Former Riverside City College student Enrique Marquez Jr. told a federal judge Jan. 25 that he wants to withdraw admissions he made under a plea agreement in February 2017.

Marquez supplied the weapons used to kill 14 people and wound 23 others in the December 2015 San Bernardino terrorist attack.

Marquez was arrested after calling the police to admit that he purchased the guns that were used by Syed Rizwan Farook and Tashfeen Malik to carry out the attack.

The FBI eventually arrested Marquez and questioned him for 10 days, during which Marquez admitted his role in the plots.

The U.S. Attorney’s Office said that Marquez admitted making plans with Farook to commit mass murder at the library or cafeteria of RCC. The men also planned to go on a killing spree along the eastbound Riverside 91 Freeway during afternoon rush hour, identifying a particular section of roadway that had no exits, according to the FBI.

Marquez pleaded guilty in February 2017 to one count each of providing material support to terrorists and making false statements in the acquisition of firearms.

In exchange for his admissions, the U.S. Attorney’s Office dropped related charges of marriage fraud, immigration visa fraud and lying on a federal document, which Marquez engaged in with Mariya Chernykh, a Russian immigrant.

The pair created a joint checking account and a back-dated lease that implied they shared a marital residence, enabling her to remain in the country and collect benefits, according to court papers. They also took staged family photos to make the marriage appear legitimate.

Marquez and Chernykh signed immigration documents, under penalty of perjury, falsely stating that they both lived at the same Riverside address, prosecutors said.

However, Chernykh eventually moved in with another man in Ontario, while Marquez received money from her as part of the arrangement.

Chernykh admitted charges of conspiracy, perjury and making false statements to federal officials. She’s free on bond and is slated to be sentenced May 20.

Marquez appeared with his attorney, John Aquilina, at the U.S. District Court on Jan. 25, where Aquilina told Judge Jesus Bernal that the defense will seek to have the plea agreement voided.

According to Aquilina, the reasons for the proposed action will be established in a motion he will submit to the court in May.

Federal prosecutors are expected to challenge the motion.

Thom Mrozek, a spokesman for the U.S. Attorney’s Office, said that his agency had no immediate comment on Marquez’s request.

He said Bernal told the defense that it must submit its motion by May 13.

After that, the government will respond, and a hearing on the motion will be held.

Mrozek said he could not comment on whether prosecutors would attempt to reinstate the dropped charges until after Bernal holds that hearing.

Marquez had been slated for sentencing on multiple dates in 2017 and 2018. However, after changing attorneys, his sentencing was postponed for an indeterminate period.

“This defendant collaborated with and purchased weapons for a man who carried out the devastating December 2, 2015, terrorist attack that took the lives of 14 innocent people, wounded nearly two dozen and impacted our entire nation,” then-U.S. Attorney Eileen Decker said in February 2017. “While his earlier plans to attack a school and a freeway were not executed, the planning clearly laid the foundation for the 2015 attack on the Inland Regional Center.”

Marquez is being held without bail in a federal detention center in San Bernardino.