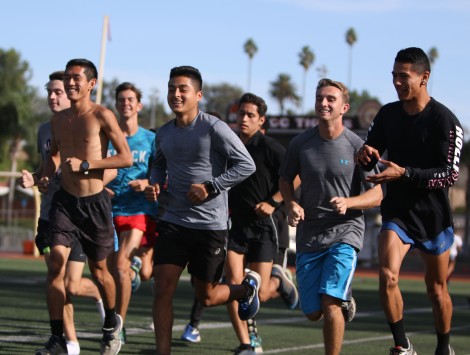 Weeks after securing the Orange Empire Conference Championship at the end of October, the Tigers performed adequate enough at the Southern California Championship Regionals, placing eighth overall, to merit a ranking at the CCCAA State championships this year. The competition took place at the Woodward Park in Fresno.

“Coming into this race we were ranked eighth in southern California and 10th in the state, so to finish fifth in the state championships was very satisfying,” coach Jim McCarron said. “When you’re ranked as low as we were and then to finish where we did, it’s pretty amazing. I thought that we could finish in third or fourth, but that was always an outside chance. We said as a team that if we could finish in the top five that we could walk away happy with the result. The team did what they said they would do.”

The team saw two of their best march within top 30 in a race with 168 total participants with sophomore Austin Dai placing the highest among his team. Dai landed in 22nd with a total time of 20:57.9.

Sophomore standout Enrique Villa, who was recently named the Orange Empire Conference Runner of the Year, placed 29th with a clip reading 21:07.5.

“I was pretty surprised to set the fastest time for our team,” Dai said. “Mostly because our usual guy for the team, he’s usually able to get ahead of me. Maybe he had a bad race, but I was able to catch up to him in the race and passed him and yeah I was surprised. There’s a little bit of pride there. But whether or not I got first on my team, our team in general still got fifth. I wanted us to get first, definitely.”

Dai recently surged in the later half of the 2018 campaign moving his overall rank from fourth to first on the entire team by the time RCC would reach the postseason. Along with this, he improved his overall best time from 20:55:00 to 20:14:00 between his time as a freshman to sophomore.

“I like that I finished the season first on the team,” Dai said. “There is certainly nothing bad about that. I am excited for my new position on the team. It gives me a little bit of confidence when it comes to performing in races.”

Villa, who has remained a standout athlete since he first arrived at RCC, has also shown athletic excellence this season. Along with numerous first place rankings in the multiple races in both the 2017 and 2018 seasons,

Villa has also garnered a various number of awards and accolades singularly such as the 2017 OEC Singular championship, 2017 All-Conference honors as well as the aforementioned 2017 and 2018 OEC Runner of the Year award.

“This race was more tactical, how we attacked the race,” Villa said. “We needed more speed. We could’ve done better. I definitely could’ve done better. But watching Austin Dai pass me during the race, I was happy for him and to see all of his hard work pay off here in the final race of the season. The coaching was pretty good. The week before the state title race, coach McCarron prepared us for that day. We were all ready to give it our all, knowing it was the last race of the season.

Along with the team closing out their season with a stellar record, McCarron was also honored with the OEC Male Coach of the Year for the fourth straight season and the eighth time in the last 11 years.

McCarron has coached the RCC Tigers for the last 12 years, having started all the way back in 2006.

“When I first got the job, I got it five days before the season started in 2006,” McCaron said. “We finished 28 in the state that year. Ever since then, we’ve always finished a top three team. We have won state seven times in 13 years (across both track and cross country). It’s attributed to a lot of different things. For instance it’s a program that I believed in, and that the coaching staff buys into. I have a great coaching staff that really puts a lot of work in and that helps guides the students to success. So if the athletes don’t buy into the program, it doesn’t work. The number one thing that we do is we help transfer young men to universities. We’ve won seven state titles. We’re definitely one of the top programs for cross country and track in the nation for community colleges and that’s because of our program that works well.”