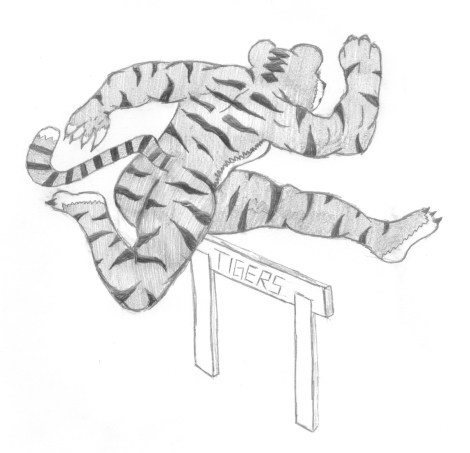 Records are meant to be broken and that’s exactly what the Riverside City College track and field team did at the 2018 Orange Empire Conference Championships on April 26.

While grabbing their twelth consecutive OEC title, the RCC men’s team set the new top score in the conference’s 32 year history. They dominated, scoring 522 points and shattering the previous record of 441, which the Tigers set in 2013. Second place finisher Orange Coast College had only 82 points, giving RCC a meager 440 point cushion.

Of the 21 events, the RCC men notched 19 victories, while producing an individual conference champion in all running events.

Men’s head coach Jim McCarron had nothing but praise for his athletes.

“I am very proud of the team and the coaching staff,” McCarron said. “In order to have success like this there must be 100 percent buy in to the program and this team believes in what we are doing.”

The short distance sprinters for RCC were lightning quick as they swept the sprint events. The Tigers swept the podium in the 400-meter, with Christopher Shiley edging out Keanon Dennis by one tenth of a second for the victory with a time of 47.61 seconds. Jamaal Palmer had his name called in the absence of teammate Antonio Mitchell and delivered, winning the conference titles in the 100 and 200 with times of 10.5 seconds and 21.1 seconds.

“Palmer has improved immensely this season,” coach McCarron said. “Jamaal stepped up and ran his best times of the year.”

The field events also went well for the Tigers as they collected five conference titles. Justin Reed collected the gold in the long jump with a 21’10” jump while Dorian Dawson won the triple jump with a jump of 43’ 9.75.” In the throwing events, Jordan Davis was the champion in the discus with a throw of 142’ 8” and the shot put while tossing it 47’3.75.” Marcos Gonzalez was the champion in the javelin at 174’ 9.”

The RCC women also ran up the score during the rest of the conference, putting 385 points on the board to runner up OCC’s 139. It was the tenth straight conference championship for the women, continuing the decade-long dominance of the OEC for the Tigers.

RCC women’s track coach Damien Smith was pleased with the performance. “They did a great job,” Smith said. “We got a lot of people to (Southern California regional) prelims.”

Among those advancing to the Southern California regional preliminaries, was standout distance runner Sarah Hollis, who finished the OEC finals with three conference titles in the 5,000-meter, 3000 steeplechase and 10,000-meter run.

Sprinting events were kind to the Tigers as well, they swept three races and claimed each victory. The 100-meter was a photo finish, with Argnae Myers grabbing the victory over teammate Alondra Gonzalez by just .001 seconds in a thrilling race. The 200-meter crown went to Maryjane Smith at a blazing fast pace of 25.33 seconds and she kept up the heat with a time of 57.59 seconds in the 400-meter.

The women took gold in three field events. Ca’may Stocker edged out Saddleback’s Anna Gillis for the win in the shot put with a toss of 38.7 meters. Katelyn Baker took the triple jump title at 11.44 meters and Javany McDermott claimed victory in the high jump with a leap of 1.6 meters.

The resounding success for RCC at the OEC Championships was no surprise. The Tigers have thoroughly dominated all competition throughout the season and they have one goal in mind, the state title.

“I expect that (the men’s team) will be ready to put themselves in position to win the title but we still have a few weeks to go,” McCarron said. “They are ready for the challenge.”

RCC will continue their chase after the California Community College Athletic Association Championship on May 12, when they travel to San Diego to compete in the Southern Califonia regional finals. The team will have a chance to qualify for the CCCAA State Finals on May 18-19 in Bakersfield, where the Tigers will get the opportunity to be champions of California once again.