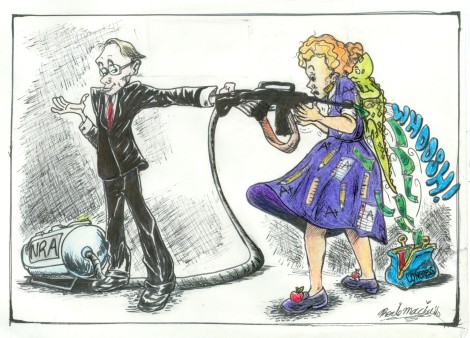 When tragedy takes place in this country, we demand immediate and erratic solutions that sometimes disregard any form of common sense.

After the wake of the Parkland High School shootings, the idea of providing guns to teachers to defend students would do more harm than good.

At first, the idea of arming teachers, seems like a charming solution to deter the increasing problem of mass school shootings.

In an ideal world, we can simply give teachers the option to possess a firearm, train them effectively, and have them defend our innocent children from school massacres.

Although it seems like a good idea, it’s actually a flawed anecdote that tries to convince the public that every teacher is fully capable of handling tense and horrific scenarios.

According to The Washington Post, School Resource Deputy Scot Peterson, took a defense position outside Marjory Stoneman Douglas High School. Peterson was seen on video armed and in uniform, but did not react according to his duties. The deputy did not go into the building and instead waited outside the school building where 17 innocent lives were taken.

This man was armed and in a position to save lives, but couldn’t find the courage in himself to do his job the way he was supposed to .

How can we expect the same for teachers with occupations that have nothing to do with protecting lives?

We can’t expect to provide every teacher with a gun when we do not even pay our teachers a fair wage for the value they bring to our society.

According to Vox, there is not enough research proving arming teachers has enough of a positive impact on the safety and well being of students.

The other side of the argument relies on comforting and unrealistic anecdotes that derives from the “good guy with a gun” as an extension that assumes all teachers are adept to use the gun as a life-saving protective tool.

Those who support armed teachers are blindsided with the assumption that all teachers are morally sound without harmful bias or intentions.

As a first grader, my teacher slammed my arm against the edge of my desk out of frustration from my low attention span. She then proceeded to shove me against a different desk. Out of intense fear of being harmed again, I did not tell anyone about this incident and attempted to block it from my memories until I felt it was too late to bring up.

If this teacher abused her power, now imagine the type of power a teacher can have over its students when armed.

Anyone in a school setting can feel unsafe at any time with an educator possessing a gun.

It can especially happen when the person who is supposed to protect you does not seem to care about your well being even without a gun.