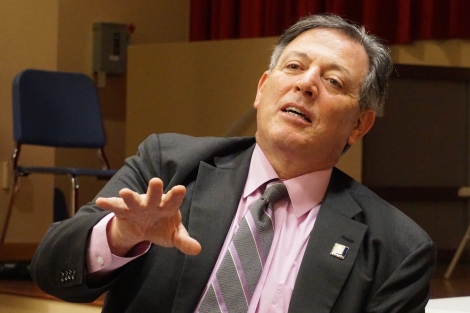 John Russo has been Riverside’s City Manager since May 4, 2015. Mia Magana | Viewpoints

Russo was born and raised in Brooklyn, New York and is the son of Italian immigrants. His father, a construction worker, and his mother, a dressmaker, moved to the United States from London in 1958 five months before he was born.

He worked two years at a legal aid office in St. Louis, Missouri before moving to Oakland in 1987, where he worked as a private attorney until 2000.

Russo has been Riverside’s City Manager since May 4, 2015, with the council citing Russo’s legislative and executive management experience as well as his commitment to fiscal responsibility, responsiveness and transparency.

Russo previously spent nearly four years as City Manager of Alameda and before that served as the City Attorney of Oakland for 11 years. Prior to being elected City Attorney in Oakland, Russo was a City Council member there for nearly six years.

Russo served on the Oakland City Council from 1995-2000, where he authored Oakland’s open government law, known as the Sunshine Ordinance. He also served as Oakland City Attorney from 2000-2011 winning California Lawyer magazine’s “Lawyer of the Year Award” for Public Service in 2004.

As city attorney, Russo created the Open Government Program, which ensured that citizens of Oakland have full access to information about their city and that the business of city government is conducted in the light of day.

Russo’s passion for public service dates back to his childhood when he witnessed his father help their neighbors voice their needs to their city’s representative. His father often helped without ever earning any compensation.

“My dad was like the go-between with all the city’s politicians and the politicians tried to help my dad because a single vote of confidence from him was worth 200 votes. I had always had the idea that I could be the guy on the other end of the phone that could make things happen,” Russo said.

“Have I made wrong decisions? Sure, everyone does. We all make mistakes because we have imperfect information, we’re not always as mature as we should be or our emotions get the better of us. However, I can honestly say that I never made a wrong ethical decision.”