Despite one’s beliefs, different views ought to be represented 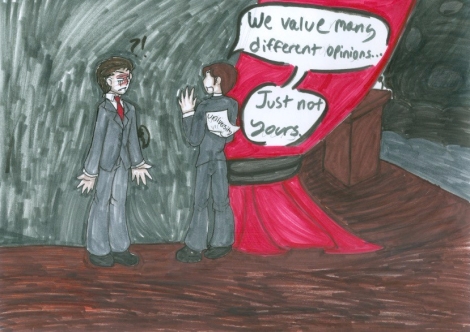 The University of California, Berkeley—the campus that famously birthed the free speech movement of the 1960s—was once the epicenter of the marketplace of ideas. Now, it has sadly devolved into a center for violent confrontations.

Berkeley has experienced a number of violent clashes between far-left and far-right protesters in recent months.

Masked anti-fascist agitators, commonly known as Black Bloc, broke windows and set fires at the campus on Feb. 1 in protest to an appearance by Milo Yiannopoulos, a former senior editor at Breitbart News. Yiannopoulos has been a prominent voice of the so-called “alt-right” movement, and has expressed views considered racist, misogynistic and anti-Islamic in his tenure as a political commentator.

On March 5 and April 15, pro-Trump and anti-Trump groups skirmished in nearby Berkeley parks.

While Berkeley officials have reasonable grounds for their decision, the stifling of one’s freedom of speech is never favorable, and for the sake of our democracy, such censorship must be avoided.

Sen. Bernie Sanders, I-Vt., has even flown to Coulter’s defense.

“I don’t like this,” Sanders said in an interview with The Huffington Post. “Obviously Ann Coulter’s outrageous—to my mind, off the wall. But you know, people have a right to give their two cents-worth, give a speech, without fear of violence and intimidation.”

It seems liberals and progressives are undergoing an ideological identity crisis: One portion believes hateful and bigoted speech ought to be countered as aggressively as possible, while others believe any move to censor—regardless of how repugnant an individual’s views may be—is counterproductive and dangerous to our democratic process.

Sanders is seemingly in agreement with those in the latter camp.

“To me, it’s a sign of intellectual weakness,” Sanders said. “If you can’t ask Ann Coulter … questions that expose the weakness of her arguments, if all you can do is boo, or shut her down, or prevent her from coming, what does that tell the world?”

To answer Sander’s rhetorical question, the censoring of individuals like Coulter only trivializes the first amendment, and signals to the rest of the world that democracy is not valued.

“Berkeley used to be the cradle of free speech. Now it’s just the cradle for f—— babies,” Maher said on his HBO television show “Real Time.” “I feel like this is the liberals’ version of book burning, and it has got to stop.”

You may believe that Coulter’s speech is offensive. I certainly do. I believe she and those that share her regressive ideology represent all that is morally reprehensible. But I am still behooved to defend their freedom of expression, even when what is being expressed is detestable.

Ideas must be explicitly communicated and vigorously debated. When met with hateful and bigoted speech, we must respectfully counter their views intellectually rather than resorting to threats of violence or censorship.

If we do not stand for the liberty of our opposition today, then surely our liberties will be on the chopping block tomorrow.