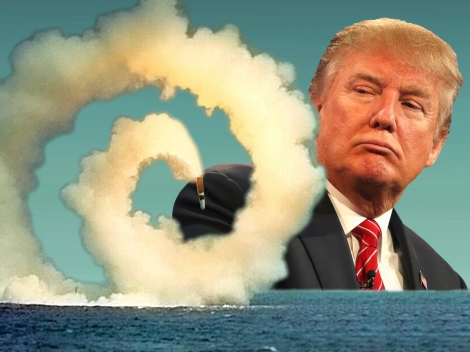 Back in February, President Donald Trump gave a horrifying, yet somewhat professional sounding speech to Congress. Upon hearing his slightly more “presidential” tone, pundits across America promptly rejoiced that he had finally “become president.”

However, it appears that these pundits were mistaken, or perhaps just completely full of it. As it happens, Trump’s decision earlier this month to launch 59 Tomahawk cruise missiles at al-Shayrat Air Base in Syria is what actually legitimizes Trump’s presidency, according to pundits such as CNN’s Fareed Zakaria anyway.

“I think Donald Trump became President of the United States, I think this was actually a big moment,” Zakaria said on the night of the bombing. Who could have guessed that dropping 59 cruise missiles on a Syrian airbase was all it would take to soften this frequent Trump critic’s opinion?

Meanwhile at MSNBC, Brian Williams nearly caused me to have a severe brain aneurysm as he fawned over footage of the missiles being launched. He was apparently so moved by footage of this barrage of death that he felt compelled to wax poetic about it, stating “I am tempted to quote the great Leonard Cohen ‘I am guided by the beauty of our weapons,’ and they are beautiful pictures of fierce armaments making what is for them a brief flight over to this airfield.”

I apologize in advance if reading Williams’ bloodthirsty ramblings caused any of you to suffer severe brain aneurysms, however it highlights a very disturbing trend within America’s news media. They waste no time to start beating the drums of war whenever America decides it’s time to bring democracy to another nation via bombing the hell out of it.

Whether it’s Iraq, Afghanistan, Libya or Syria, our media is always more than ready to support this kind of military adventurism no matter the cost. And it is indeed costly.

According to U.S. Navy spokesman Robert Kloon, a Tomahawk cruise missile costs about $1,410,000 to manufacture. Trump just launched 59 of them at an airfield. Within 24 hours after the bombing, Syrian Gov. Talal Barazi confirmed the airfield was operational again. To clarify,  Trump just spent $83,190,000 on an airstrike that accomplished nothing, apart from possibly making “The Donald’s” hands feel slightly larger.

In addition, Pentagon spokesman Capt. Jeff Davis tells us that Trump actually warned the Russian soldiers stationed at al-Shayrat of the impending airstrike, so no one was even home when the bombs hit.

All of this was purely for show, just a way for Trump to play the strongman, coincidentally while hosting the President of China, Xi Jinping, at Mar-A-Lago.

Trump remembers his dinner with Xi well. “I was sitting at the table, we had just finished dinner, we were now having dessert. And we had the most beautiful piece of chocolate cake that you’ve ever seen and President Xi was enjoying it … so what happens is I said (to Xi) ‘we’ve just launched 59 missiles heading to Iraq,’” Trump recounted in an interview with a sycophantic Fox News reporter, who then corrected the President that he had bombed Syria, not Iraq.

The President of the United States of America, the Commander in Chief of our entire military, cannot remember the name of the country he just bombed. He sure can remember the fantastic piece of chocolate cake he had while ordering the airstrike though, and he most certainly remembers rubbing President Xi’s nose in it as well!

Seeing the president take this kind of action, then seeing so many in the media fawn over it was disgusting. Seeing The Washington Post’s David Ignatius praise the “sincerity” in Trump’s explanation that he authorized the strike after seeing pictures of Syrian children killed in a chemical attack (a shameless emotional appeal) was disgusting.

Seeing Ignatius go on to say the move “restored the credibility of American power” threw me into blind, violent frenzy during which I had to be forcibly restrained as I seized violently and spoke in tongues. I may or may not have placed an ancient Celtic curse upon The Washington Post.

What upside down bizarro world are we living in? This airstrike was nothing more than an incredibly costly way for an exceptionally narcissistic president to flex his muscle, inflate his ego and perhaps quell some of the concerns about his ties to Russia, that’s it. It accomplished nothing aside from bringing us closer to a war with Syria. Why is this action being praised so?

A potential war with Syria will end much the same way America’s adventures in Iraq, Afghanistan, Libya and many other Middle Eastern nations have.

We will storm in, guns blazing, ready to bring peace through war. We will spend too much money, lose too many lives and return home with nothing to show for it, unsure why we were there in the first place and unready to deal with the inevitable fallout from our decisions.

The Syrian people will be worse off than they were before, but now the brutal dictator ruling over them will be friendlier to America.

Journalists praising and encouraging actions that push us closer to a conflict such as this is absolutely abhorrent and beyond shameful.