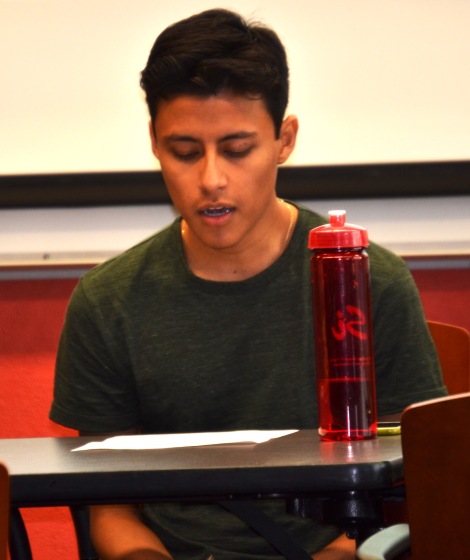 The decision for president wasn’t made without any complications.

When Item resigned from his position as president Nov. 1, the senate voted to continue the line of succession which placed then vice president Santiago into the position of president.

Santiago was reluctant to become president. He preferred to be vice president and leave the position of president to ASRCC Public Relations Director Sarah Amro, who was nominated at the Nov. 7 Executive Cabinet meeting.

However, at the Nov. 9 senate meeting, the ASRCC senate rejected Amro’s nomination.

Members of the senate questioned Santiago about his preference for vice president, to which Santiago explained that while he felt he was qualified to be president, he was initially a senator at the beginning of the semester.  He did not want to be overwhelmed with the new responsibilities he will have to learn and end up dropping his office.

ASRCC members such as Indra Torres and Alicia Lopez think Santiago is a good candidate for president.

Lopez, ASRCC secretary, believes that Santiago’s experience as secretary and internship with the mayor will make him a good president.

“He is going to be a good president” Lopez said. “He is smart enough.”

Torres was disappointed that Item and Smith resigned.

“You have to be committed once you sign up,” said Torres.

While Torres has faith in Santiago’s abilities, she believes someone else should have been elected.

“He is a good person…I believe in him,” Torres said.

To her the only downside is getting someone who has to learn the presidential responsibilities.

“He has to now learn new duties, someone else should have been elected,” Torres said.

The president of ASRCC is the chief executive officer and nominates representatives.

Santiago must also be the official co-host for the ASRCC government events and is responsible for scheduling meeting times for the Executive Cabinet.

He is also now responsible for the implementation of ASRCC resolutions, policies and procedures and can veto legislation passed by the ASRCC Senate.

The president also assists in completing tasks that were assigned to them by the RCCD Student Trustee.

No vice president has officially been appointed, however, pro tempore Gerardo Jimenez is taking on the responsibilities of interim vice president while awaiting senate approval.

Misty Severi contributed to this article.