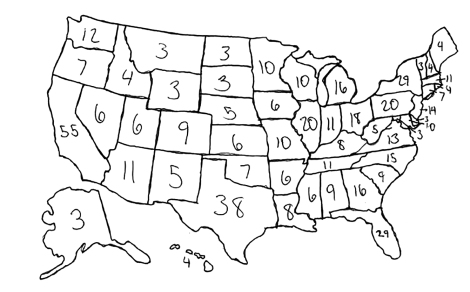 The Electoral College often comes into discussion after a close election.

Equal representation is no longer held within the current system and change is a must.

Currently, the candidate who receives a majority of electoral votes and appropriates 270 out of 538 wins the presidency. The number 538 is the sum of the nation’s 435 Representatives, 100 Senators and 3 electors given to the District of Columbia.

As seen in this election, both candidates were very close to each other in the popular vote, with Trump’s 47.2% and Clinton’s 47.9% but there was one definitive winner when it came to the Electoral system.

The system in place now only allows a winner take all. This puts states with higher populations to a disadvantage to smaller states since larger states need more populous votes per electoral vote.

Donald Trump won the election with 290 electoral votes to Hillary Clinton’s 232 votes which clearly shows a winner through the system of the electoral college. As for the popular vote, Clinton won only by a small percentage, according to CNN.

For example, Iowa has 6 electoral votes as compared to California’s 55 votes. California needs 508,344 people per electoral vote while Iowa only needs 386,394. This gap in population allows Iowa to have a higher value state in voting power since it has a lower population level.

In a paragraph from uselectionatlas.org they state that “The Electoral College actually enhances the status of minority groups. This is so because the voters of even small minorities in a State may make the difference between winning all of that State’s electoral votes or none of that State’s electoral votes. And since ethnic minority groups in the United States happen to concentrate in those States with the most electoral votes, they assume an importance to presidential candidates well out of proportion to their number.”

The fact that not all of the 538 electoral votes have been added up yet is troubling. New Hampshire just declared Clinton the winner of the state Nov. 14, according to the Associate Press and Michigan is still tallying votes from all of its counties. This means some states didn’t even contribute to the main election night on Nov. 8.

We propose that Congress re-evaluate or amend the Electoral College to where the system is no longer winner take all in a state but the votes of the electors be for the candidate of their chosing. If California has 55 electoral votes and 30 vote Democrat while 25 vote Republican, those votes would go to the presidential candidate of said party.

This system allows for a more equal representation of which electors support which candidate and helps distribute the Electoral votes across the states evenly. Along with this, we believe that the Electoral College’s population count needs to be changed per state to be rid of states with higher voting power because of their smaller population.

Just like this last election, there have been many others where the presidential race was close and was mostly decided by electoral votes such as the Al Gore and Bush election. These close races could possibly be avoided if the Electoral College was more equal and not winner take all by state. If the elector’s vote stood as an individual vote, we believe it would be beneficial to the voting process in the U.S. presidential elections. Just like the popular vote matters, the officials we elect into the house and senate, vote for us.