Why attaining and keeping a livable wage should be a priority 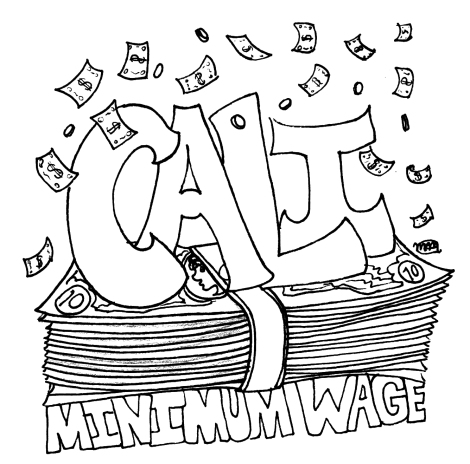 In a continuation of the never ending “who’s more progressive” race, both California and New York became the first states within the United States to approve a raise in their minimum wages to $15, with California setting the goal by 2021.

Raising the minimum wage is a highly debated topic because setting or changing a price floor on wages and altering it always has consequences on consumption and supply within any economy.

The San Francisco Federal Reserve Bank published in its Economic Letter for Dec. 21 that while most data about the minimum wage is contradictory, and that while there is an obvious correlation of minimum wage increases and job-loss, it’s among the lowest skilled workers.

Furthermore, while most people believe the raising of wages will up the prices of goods and lower demand, the Pew Research Center actually asserts that most employers would rather offset the increase in wages by replacing unskilled workers with different inputs like equipment or capital. Actually giving people more money in their pockets, especially in the U.S. will only cause their consumption to increase.

The San Francisco FED asserts that while most assume the effects of a minimum wage increase to include a slight negative effect on employment elasticity in unskilled labor markets they state the effect is usually pretty close to zero.

It also contends that assumption in two ways. First that when the numbers are examined geographically and against areas with similar costs of living that they didn’t even find much job loss among restaurant workers which make up a large portion of unskilled laborers, it’s mostly unskilled teenagers in the service industry who get hit.

Secondly that on the large scale of total jobs, it’s really only a drop in the bucket compared to total jobs and when weighed against combating income and wage inequality it’s a trade-off that has to be made.

As an editorial board we would happily take the trade-off between a minimum wage increase despite a loss of jobs for the youngest most unskilled workers for the sake of increasing the living standard.

The level of income inequality within our country is generally known to be pretty crappy, with our GINI coefficient (the standard measure of inequality) coming in comparable to most Latin American countries in the 0.4-.5 range (the lower the score the more equitable incomes are).

This is evident in the change of incomes over the last 40 years, with CEO’s going from making on average little over $1 million a year in the early 70s to the average CEO salary of $15 million in 2013 according to the Economic Policy Institute.

On the other side of that according to recent research compiled by the Pew Research Center in 2015, when adjusted for inflation the federal minimum wage peaked in value in 1968 at what would be worth $8.54 in today’s dollars.

The lack of action by law-makers to build but a child-centered social investment model as seen in European social democracies has hindered us from long-term economic advances, leaving us with the easiest route to combat financial inequality being to raise the minimum wage.

It’s undeniable American consumer behavior to spend all the money one has and even money one doesn’t have (which has something to do with the way inequality has shaped behavior in the U.S. but that’s another argument). So when we see a wage hike we actually see an increase in spending meaning demand will go up and eventually to reach equilibrium employers will eventually start creating more jobs again.

According to the U.S. Census Bureau of all the full-time year-round workers in 2014, 2.9 percent still fell below the poverty level. These people are known as the working poor. Generally they make minimum wage and don’t have support from a secondary worker in their household.

But a householder working 40 hours and 50-52 weeks should not have to rely on a secondary worker to stay out of poverty.

The most common ways of staying out of poverty when living off low-income earnings include keeping your family size small, like 2 person small, secondary workers, supplemental nonearnings income like anything paid under the table and welfare benefits.

By raising the minimum wage people and specifically female householders won’t have to make the smart economic decision of staying home with their child(ren) and going on public assistance over working full time and paying for child care.

A living wage is most often defined as a wage high enough to keep a four-person household out of poverty by working full time. According the U.S. Census Bureau’s Poverty Threshold for 2015 for a family of four with one worker would be $24,120 or about $11.60 an hour, but that’s on the national scale where minimum wage is at $7.25.

It’s easily conceivable that in California, where the cost of living is higher than the national average that the living wage would be even higher putting the proposed $15 minimum wage right where a minimum wage should rightfully be. Especially considering inflation rates for the next six years.