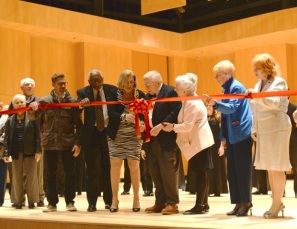 RCCD’s Board of Trustees cut the ribbon for the grand opening of The Henry W. Coil, Sr. & Alice Edna Coil School for the Arts which will house the District Offices and Riverside City College’s Culinary Academy. (Stacy Soriano | Viewpoints)

Henry W. Coil, Jr. donated $5 million to fund programs at the Coil School for the Arts that were named after his parents. Stacy Soriano | Viewpoints

An inside look of Riverside City College’s 1916-1917 roster displayed March 13 at the Centennial Plaza in the Board of Trustee building.

Attendees filled the Board of Trustee’s new conference room located in Centennial Plaza, it was filled by Norco College, Moreno Valley College and Riverside City College faculty displaying their schools’ programs on March 13. 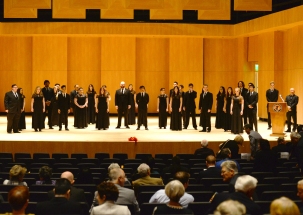 Riverside City College chamber singers perform under direction of John Byun in the new 420-seat concert hall on March 13. during the preview and dedication of Centennial Plaza. 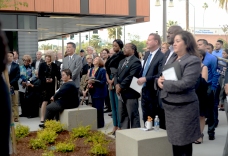 Attendees listen to Chancellor Michael Burke in the Centennial Plaza courtyard Marc 13, during the plaque unveil for Riverside City College. Attendees clap after Henry W. Coil Jr. cut the ribbon for the Coil School for the Arts building on March 13. in Downtown Riverside, Centennial Plaza.

The three district colleges came together to celebrate 100 years of history at the district’s Centennial Plaza located at the corner of University Avenue and Market Street in Downtown Riverside at 5 p.m. on March 13.

“We’re on a marquee corner,” said Chancellor Michael Burke about the location of the plaza. “It will, I think, bring attention to this downtown area in a way that hasn’t really been thought of as an arts entertainment center.”

Representatives from each college and various college programs flooded the event to showcase what RCCD has to offer.

Exhibitions the college programs put together filled the board room in the lower level of the district offices building. The programs displayed artifacts and documents from the past and the present including typewriters, nursing mannequins and the original grade roster from 1916.

Attendees were welcomed to walk the premises to view the amenities in the Culinary Arts Academy and the Coil School for the Arts.

The celebration moved to the courtyard at 6 p.m. to dedicate a plaque for the plaza.

Chancellor Burke and Virginia Blumenthal, the president of the Board of Trustees, gave a short speech before the unveiling of the plaque.

RCC President Wolde-Ab Isaac and the Board of Trustees unveiled the commemorative plaque.

Mayor Bailey said he is proud to have Centennial Plaza located across City Hall.

“It truly is a dream becoming reality here in Downtown Riverside to have the investment of RCCD and institutions of higher learning,” Mayor Bailey said. “There’s so much synergy with arts and innovation in Riverside.”

A ribbon cutting ceremony took place inside the concert hall to mark the grand opening of the Henry W. Coil, Sr. & Alice Edna Coil School for the Arts.

The Board of Trustees and RCC President took to the stage to welcome the Coil family and thank them for their contribution that helped build the School for the Arts.

The audience gave a standing ovation as the Coil family entered the stage.

Henry W. Coil, Jr., with the help of Blumenthal, took the ceremonial scissors and cut the ribbon to inaugurate the school.

The RCC Chamber Singers followed with a performance of “This Marriage” by Eric Whitacre and “Daniel, Servant of the Lord” arranged by Stacey V. Gibbs.

“I think with this facility now we’re going to be growing like crazy,” said John Byun, associate professor of RCC’s music program. “We have a strong program now but this will make it stronger.”

The attendees retired to the rooftop garden where refreshments were made available by the students at the Culinary Academy. The students prepared bite-sized pastries, hors d’oeuvres and a cake decorated for the centennial celebration.

The celebration concluded with a firework display as Chancellor Burke made a toast celebrating the centennial and silver anniversaries of the colleges.

“I thank each of you who remain committed to our colleges and our students,” Burke said. “So let’s toast to a new chapter in RCCD history as we dedicate Centennial Plaza.”

“Lives will be changed and our community will be enriched through the educational programs offered in these buildings,” he continued.

The crowd gasped and cheered as the splendor of fireworks illuminated the sky above the plaza.

Classes at the Coil School for the Arts are scheduled to begin in the fall semester while the Culinary Academy is expecting to move from the Spruce Street facility into the plaza in April.