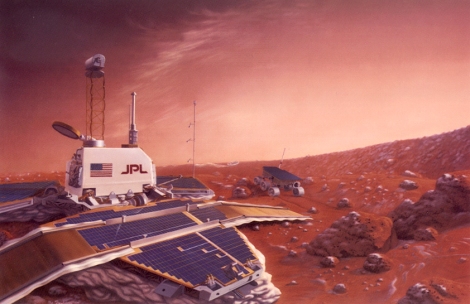 A Blast From The Past: Sojourner, a Mars rover, departs from the Pathfinder lander after it touched down on the surface of the planet July 4, 1997.
Courtesy NASA /JPL- Caltech/photo illustration by Pat Rawlings/ supplied by Gye Reese

It’s been done. Science fiction has been proven science fact: there is liquid water on Mars.

“It’s not something we’re shocked about in the scientific community,” said Scott Blair, Riverside City College instructor of Astronomy. “It’s one more research group following up on a perspective of nature that we already suspected and evaluating some data, plus getting results in alignment and congruent with what we already suspected and other interpretations have already been.”

The extraterrestrial body that researchers know as the red planet now has confirmed images detailing streams of water trickling down the hills of Gale Crater, Hale Crater and Horowitz Crater in addition to many more. The possibility of life can now be thrown into the equation because it’s a fundamental fact that water is one of the key elements for all forms of life to begin and be sustained.

“The existence of liquid water, even if it is super salty briny water, gives the possibility that if there’s life on Mars that we have a way to describe how it might survive,” said John Grunsfeld, associate administrator for the Science Mission Directorate at NASA, according to The New York Times.

NASA scientists have known about the existence of water on Mars since they first viewed the ice caps on the northern and southern poles when Mariner 9, an unmanned space probe, successfully arrived at Mars in 1971. Now with this discovery of liquid water on Mars, the research suggests the possibility of life now has a higher probability than before.

It remains to be seen whether the new discovery improves the odds of life on Mars, but NASA researcher Mary Beth Wilhelm said the results suggest “more habitable conditions on the near surface of Mars than previously thought,” according to CNN’s website.

“How habitable,” she said, “depends on how salty and how cold the conditions are.”

But Alfred McEwen, Instructor at Arizona University for planetary geology, who observes NASA’s HiRISE high-resolution camera aboard the Mars orbiter, said he’s fairly confident life will one day be found on Mars.

“It’s very likely, I think that there’s life somewhere in the crust of Mars, microbes,” he told CNN.

NASA’s next mission to send another rover won’t be until 2020, but are now selectively locating a landing spot that might be habitable. The current active rover on Mars named Curiosity, is prohibited to go near Gale Crater where liquid water streaks were discovered, due to threat of contamination of any possible Martian life with a highly irradiated rover from years of ultraviolet light exposure.

“We haven’t been able to answer the question, ‘Does life exist beyond Earth?'” Jim Green,

Director of planetary science at NASA said. “But following the water is a critical element of that.

“We now have, I think, a great opportunity to be in the right locations on Mars to thoroughly investigate that,” according to a NASA interview.

As soon as 2018, NASA may have its successor to the space shuttle orbiters completed and ready for lift off for human exploration on Mars. At 382 feet tall the new Space Launch System with the Orion spacecraft in dock will be the largest vehicle ever built and will be even more powerful than the Saturn V rockets that carried the Apollo astronauts to the moon.

The Orion will feature new space travel technology such as a liquid hydrogen and liquid oxygen combustible engine along with an amped up solar electric propulsion engine, which shoots ions out its thruster.

Solar electric propulsion doesn’t provide the enormous thrust of rocket fuel. Instead it builds up speed slowly over time, eventually propelling the spacecraft at up to 200,000 miles per hour, according to Popular Science.

As far as a human exploration of Mars goes, NASA wants its astronauts there and back in one piece. For living quarters on the red planet NASA has proposed a deep space habitat connected to the Orion space capsule.

The habitat would provide more living space and a bathroom for the astronauts on board as well as life support systems, fire and radiation prevention and room to exercise in addition to doing their work. The work would be searching for any signs of possible life and researching materials in question, such as proof of active or ancient life.

In light of all these recent discoveries, manned Mars exploration is slowly turning away from science fiction and into science fact. With the new proposed technology at hand, soon the stars will no longer be just stars in the night sky, but maybe livable environments where humans can prosper and explore, outer space the final frontier.