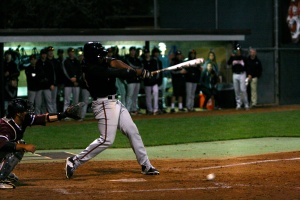 With the baseball diamond dragged and watered down, freshly cut grass and bases in place, the RCC baseball team has come back with a vengeance this season and is playing some of the best baseball seen in well over 10 years.

As the Tigers’ head coach Dennis Rodgers, who has been a coach on campus for over two decades, is coaching one of the few successful community college baseball programs in the state, winning four California State Championships over the course of nine years, highlighted by three consecutive titles (2000-2002), the organization has sure had their share of good baseball.

RCC had no trouble starting this season with a bang winning the first 10 consecutive games of the season against non-division schools.

Although they played non-league teams this shows great potential for the Tigers, it can tell a lot what the team needs to work on still.

RCC’s offense has been putting stellar numbers with an OBP of .380, slugging percentage of .402 and a batting average of .299.

If the Tigers keep up the consistency of good pitching early in the game and insurance runs late in the game they are sure to repeat last season where the team ended 13-8 in the Orange Empire Conference and advanced to the regional playoffs. The Tigers’ are sure to go even farther this season.