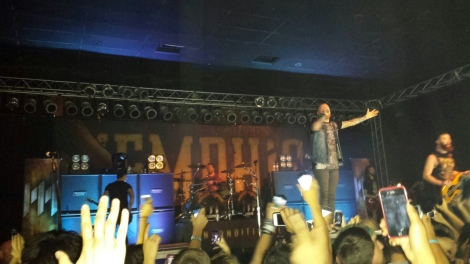 Leaving a legacy: Members of the rock band Memphis May Fire get the crowd going at the San Diego stop of the Unconditional Tour on March 23. (Maggie Mendez / Special to Viewpoints)

Memphis May Fire does not believe in rear-view mirrors.

The melodic hardcore band, hailing from Dallas, Texas, have been through their fair share of trials and tribulations in the music industry.

Having issues with record labels, lineup changes and artistic freedom, on top of the trivial drama that coincides with hitting the road with the same group of guys for months on end. MMF (consisting of vocalist Matty Mullins, guitarists Kellen McGregor and Anthony Sepe, bassist Cory Elder and drummer Jake Garland) have always managed to come out on top, and have brought their loyal fans along with them.

In February, MMF embarked on a tour in support of their fourth full-length album, “Unconditional,” and on March 23, they brought their show down to the SOMA in San Diego.

The show opened up on a high-speed note when metalcore act Beartooth rushed onto the stage, with their opening song, “Set Me on Fire,” off their debut EP “Sick.”

From the second the angry frontman in a denim jacket jumped onto the stage, veteran fans of the hardcore scene quickly glanced at each other in awe, as many realized that the chest-beating vocalist was none other than Caleb Shomo, former lead of the “electroni-core” band Attack Attack.

Shomo, along with members of My Ticket Home, originally started the band as a joke, but ended up recording and releasing an EP shortly after Shomo announced his departure from Attack Attack.

Beartooth made the best of their 30-minute slot, playing four songs off their first EP, and two off their pending album “Disgusting,” set to release some time later this year.

Australian sextet Hands Like Houses graced the stage shortly after the opening band.

After opening their six song set with “Shapeshifters,” vocalist Trenton Woodley welcomed the band’s progressive rock sound (a change from the harder feel of the night), claiming that music is about self-expression, no matter what type of sound the band takes on.

A recurring issue with musicians is the translation of vocals from the album to the stage, but this did not seem to be a problem for Woodley, who sang the soulful lyrics of songs like “Antarctica” and “Lion Skin” with heart-warming beauty.

The third band that took the stage was one that has been around the longest out of anyone else on the bill, melodic hardcore outfit, A Skylit Drive.

The central California-based band filled their set almost entirely with songs off their album “Rise,” which was released in the latter half of 2013.

ASD never quite stayed continuously on the radar, so many fans were pleasantly surprised to hear the familiar sound in songs like, “Pendulum,” where high-pitched vocalist Michael Jagmin (more commonly known as “Jag”) opened with a haunting and enticing introduction, quickly allowing the rest of the members (drummer Cory La Quay, keyboardist Kyle Simmons, and guitarist Nick Miller) to begin their heavy, hair-whipping instrumentals, and bassist Brian White to rip into Jag’s vocals with his own intense screaming.

Fans were ecstatic when, toward the end of the set, the band performed “Wires and the Concept of Breathing,” a classic off their 2008 debut album of the same name.

The song got every veteran fan of the band off their feet, with their necks and hands stretched as far out to the stage as they could, singing like each word would take their last breath along with it.

The Word Alive proceeded to take the crowd by storm, coming out as the last band before the headliners, which is always the slot with some of the highest expectations.

They mixed up their near 45-minute set with heavy and eclectic songs such as “2012” and “Hounds of Anubis.”

TWA has been one of the most interesting bands to follow through their evolution, having been through a couple important lineup changes since their initial formation in 2008.

Now with four studio releases under their belts with well-known frontman Tyler “Telle” Smith, the group has grown into one of the most unique-sounding hardcore bands in the scene.

Not only have their instrumentals matured (thanks to experimentation with the mixture of heavy riffs and electronic incorporation), but Smith has truly grown into his own as far as the vocal expectations of the hardcore scene.

Smith started off with a notable deep growl in his emotional songs, but now, over five years after his debut as a frontman, his ability for the tolerable high-pitched screech has finally been achieved, having been showcased in songs like the new track, “Play the Victim.”

Finally at about 10 p.m., the headlining band, Memphis May Fire walked onto a darkened stage to an eerie introductory echoing of clips from their first song of the set, “The Sinner.”

Being one of their heaviest, crowd interactive songs, MMF could not have picked a more perfect song to open with.

They continued the postive vibe with “Alive in the Lights,” brought their old-school country metal back with the angry anthem “You’re Lucky It’s Not 1692,” and of course, performed two new songs, entitled “No Ordinary Love” and “Sleepless Nights,” the latter being introduced via an inspirational message from Mullins that ensured every fan packed tightly into the venue, lovingly staring up at the smiling musicians, that the band would always be there for emotional support, through their music.

The intermission of the set occurred when Mullins took center stage, standing with a spotlight on him and ambient blue lights in the background, as he proceeded to sing the emotional ballad “Miles Away,” dedicating the song to his wife, and inviting Jag from A Skylit Drive to the stage to sing Kellin Quinn’s part of the recorded song.

The heart of this enduring band truly emerged when they came back to the stage for their encore.

MMF performed their two most brutally honest songs, that are essentially hate letters to music labels, entitled “Prove Me Right” and “Legacy.”

These two songs sent two very important messages to the fans in the crowd.

One, was a message of encouragement to make a name for yourself, and most importantly, by yourself.

The second message was one of promise.

A promise that Memphis May Fire have never given up for a specific reason: to be there for their fans, forever, always and of course – unconditionally.