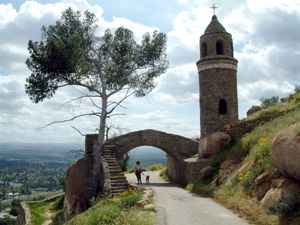 Everest. Kilimanjaro. Whitney.These are some of the greatest mountains of the world. Everest has its noble history of climb attempts, Kilimanjaro with its majesty as it overlooks the African continent and Whitney has its notable title of highest peak in America’s “lower 48” states, and its close proximity to us in Riverside.Arguably, the “mountain” most known and most dear to us at Riverside Community College would have to be Mount Rubidoux. The only “mount” in Riverside, though dwarfed by the Box Springs mountain, Rubidoux is a place of scenic beauty, ecological sanctuary and local history, though it is not without its mystery and intrigue.Originally owned by Spain several hundred years ago, the succession of owners has included Mexico, the United States, and several businesses all the way down to Frank A. Miller in 1889. Miller, who is considered one of the founders of Riverside and who contributed several very beautiful and lasting pieces of local architecture, including the beauteous Mission Inn, owned the mount. Miller’s subsequent firm, Frank A. Miller, Inc. bequeathed it to the City of Riverside in 1965.From the beautiful and still very new windows of the Digital Library to the football field to the cosmetology building, Mt. Rubidoux is a part of campus life. A lot of the students don’t know very much about the mountain though. It is as if it is some mysterious monstrosity on the edge of “Neverland” that nobody has been to.When Riverside was first established, Mexico awarded a land grant to the Yorbas with one boundary point that “was ‘a high detached hill’ and ‘standing alone’ on ‘the other side of the river’ which ‘Indians called Pachappa,” wrote William T. Drysdale in his essay “A Memorial to Mount Rubidoux, 1999.”He points out that what we now call Pachappa is not the same hill that was spoken of in this passage. This was a deliberate “mistake” made to appease all parties involved as to the acreage of the land grant.If one were to take the time to gaze up at the mount on a clear day or even to venture up either the up or down roads, which were first used by horse and buggy and eventually by the first motorized carriages, one would find a small tower and bridge.These would be the Frank A. Miller Peace Bridge and Friendship Tower. Originally built as a surprise for Miller in 1925 while he was in Asia with his wife and sister, the structures were designed by Los Angeles architect, Arthur Benton. Local youth romanticize about the possibility of the tower being an entrance to the famed Mission Inn Catacombs.A quick Google search would show that, while it had happened in some areas of the world, it is most unusual for cities, such as small southwestern cities like Riverside, to have “catacombs” at all, much less more than one. Then why is there more than one entrance? Why are we told that they extend only under the Mission Inn?Is it completely unrealistic to believe that catacombs might really extend from the Mission Inn to Cal. Baptist University?Former County Parks employee Armando Fimbres, who was stationed at the headquarter buildings located at 4600 Crestmore road on the Rubidoux side of Mt. Rubidoux, informed me of the existence of a “catacomb” entrance inside the headquarters itself, now iron barred from entry.But enough about the catacombs. Who really cares about the possibility that we’ve all been duped as to their existence and that there might really be miles of passages with actual human, most likely Indian, remains buried in them?There seems to be sufficient ramblings about the mountain housing several “shrines.”These “shrines” include dedications to Frank A. Miller, the Peace Bridge and Friendship Tower and Lt. Colonel Shienzo Kido who refused to win the 10th Olympiad at the expense and injury of his horse.There are plaques for Father Junipero Serra, who is credited with the establishment of the California Missions, businessman Harry Huntington, whose family married into Millers and Charles Loring, for his civic contributions and his tree loving.Drysdale tells us that one of the best times to visit the mountain is when it rains, as several small waterfalls appear and foot traffic decreases significantly.He also mentions the presence of the peyote plant, which is a natural growing hallucinogenic. The plants alkaloid effects may be mind altering but are nauseating upon come down. Drysdale states that the plant has had no accounts (as of 1999) of ever being eaten at Mt. Rubidoux.After it’s all said and done, Mt. Rubidoux is a symbol. It is a symbol of the beauty of Riverside, of the history of our region, of the people who have loved, lived and died here.We look up to the cross which rests at the top, most of us not realizing that it is not even the original cross, not knowing that Mt. Rubidoux has the distinction of being the first place to hold an outdoor Easter sunrise service in the United States on April 11, 1909.We don’t realize that right in our backyards is an ideal recreation location, that rock climbing and bouldering guide books have been written about it and that it has trails which are perfect for mountain biking, that it has two idyllic paths for the walkers, runners and joggers.We should all look to Mt. Rubidoux, our little Riverside Mountain, and love and respect it; love it as a California treasure, respect it as a part of Riversides past and future.